What Richard Did follows Richard Karlsen, golden-boy athlete and undisputed alpha-male of his privileged set of South Dublin teenagers, through the summer between the end of school and the beginning of university. The world is bright and everything seems possible, until in one summer night Richard does something that destroys it all and shatters the lives of the people closest to him. What Richard Did is a quietly devastating study of a boy confronting the gap between who he thought he was and who he proves to be.

Lenny Abrahamson directed the excellent low budget Dublin film ADAM & PAUL so I was eager to see what this newer production was like. WHAT RICHARD DID isn’t as good as that film, although it has some promise and typically realistic performances. The best thing about it is Abrahamson’s moody direction, which makes you feel every moment of a torrid and emotional storyline.

Unfortunately, WHAT RICHARD DID is also rather slow and lacking in incident. The storyline is a very simple one that drags out a bit, especially in the latter half, and the almost entire lack of an ending is a disappointment in itself. It’s a very realistic movie with a solid script, and Jack Reynor does well in a complex leading performance. But after ADAM & PAUL I expected more, and what I got was merely adequate. 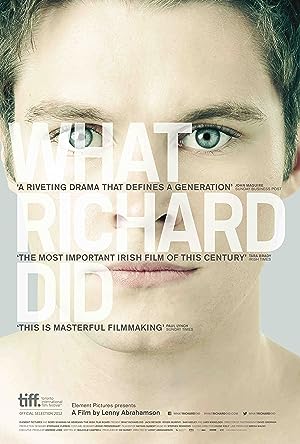 Be the first to review “What Richard Did 2012” Cancel reply