Jonas’s father expresses his enthusiasm about Conchita Wurst’s victory at the Eurovision Song Contest 2014. Hence, his 18-year-old son works up the courage to come out as a homosexual and introduce his boyfriend to his parents … unexpectedly, his father’s euphoria about the tolerance and open-mindedness displayed at the Song Contest comes to a sudden end.

his eyes. his lips. as axis of a story about illusion and choices. as remind of a great edition of Eurovision contest. and as good occasion to give a slice from the tension of adolescence. a film who not offers surprises. only a fragment of the need of self definition of a teenager and the pressure to choice the right way. but, part to be only an ordinary short film about a family conflict, ” 12 Points” has few virtues who are seductive: the prey of the mother, the game with the pills, the tension in the W.C. cabin , the final smile of Jonas.and, sure, the most important virtue, Severin Mauchle face, perfect incarnation of a special age of dreams, desires and illusions. it is not a great film. maybe only an optimistic one. but, in too many circumstances, this could be enough for see it. 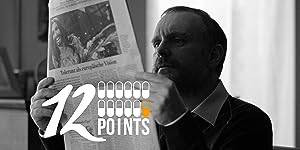