Home » Non-English with Subtitles » 15: The Movie 2003 with English Subtitles

Fast, frenetic, and furious, 15 is the story of five Singaporian teenagers who, abandoned by the system and estranged from their parents and life in general, build their own world in which gangs, drugs, fighting, piercing, self-harm and suicide are common and brotherhood is important above all else. Presents the chaotic lives of these boys, living in the shadows of a sprawling metropolis and with only each other to rely on.

I’ve seen the short and it was truly great, so I went to see the feature-length version with great expectations. I was totally disappointed.

The first section is actually the short version, where the story of the 3 friends unfolds, but then the director focuses on 1 protagonist. I guess he might not be able to get the other 2 actors to ‘complete’ the story.

Shaun as the only one remaining acted quite well, but the story would’ve been much better if it explored deeper into his love-hate relationship with Vynn. The movie fell flat on several scenes because the director just couldn’t build the story based on Shaun alone. He introduced 2 new characters but they really couldn’t help much.

I guess Royston should’ve just left the short alone until he managed to build a stronger plot. All in all, 15 is a heart-warming short film, but a disappointing feature-length. 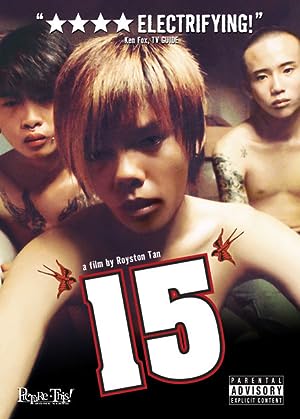 15: The Movie (2003)
90 min|Drama, Comedy|23 Oct 2003
6.2Rating: 6.2 / 10 from 719 users
Fast, frenetic, and furious, 15 is the story of five Singaporian teenagers who, abandoned by the system and estranged from their parents and life in general, build their own world in which …
Director: Royston Tan
Creator: Royston Tan
Actors: Melvin Chen, Erick Chun, Melvin Lee, Vynn Soh