Narrated and viewed from the perspective of a child in the family, Shoonen H portrays the daily trials and societal difficulties of a Christian family from just prior to the commencement of World War II to its aftermath. Distrusted as Christians, yet steadfast, the parents become sources of reassurance and discipline for the children in a society in turmoil.

This movie portrays the life of a tailor and his family from their boy’s viewpoint. The locale is Kobe, Japan before, under and after the WW2. The husband and wife are protestant Christians, minority in Japanese society even today.

The father looks confident as a tailor, always having positive view of life. The mother has strong sense of mission as a Christian, sometimes excessively strong faith. For the boy, having such mother sometimes makes his daily life difficult, but thanks to his father who even takes him to his foreign clients, the boy learns a lot in life.

As the nation goes towards militarism and fascism, tribulations come to the Christian home. As people see Christians close to foreigners and thus suspect them of spying. The father’s attitude for each issue is reassuring. From his attitude after the war, we can see it is not only his faith but also his pride as a professional tailor that support him.

As for acting performance, the boy and the girl act very well. When the girl is sent for evacuation, getting on the train, she is nearly crying. The boy quirks his face to make her laugh, and the girl’s face becomes half smiling and half crying. Her face is unforgettable. 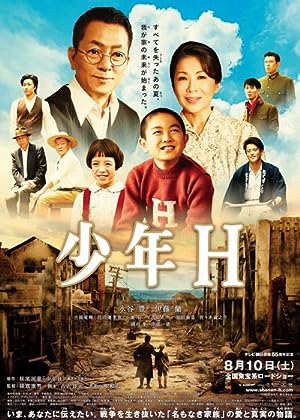 1 review for A Boy Called H 2013 with English Subtitles