A Moment In The Reeds 2017 with English Subtitles

Having moved to Paris for university, Leevi returns to his native Finland for the summer to help his estranged father renovate the family lake house so it can be sold. Tareq, a recent asylum seeker from Syria, has been hired to help with the work, and when Leevi’s father has to return to town on business, the two young men establish a connection and spend a few days discovering one another during the Finnish midsummer.

Alistair Ryder: Stop me if you think you’ve heard this one before; a young gay man in a rural setting ends up falling for an immigrant hired to do manual work on a piece of land owned by his family. The narrative similarities between A Moment in the Reeds and God’s Own Country are extraordinarily coincidental, but shouldn’t be held against this film, as both were in production in different corners of the globe at the same time.

Billed as Finland’s first LGBT romance film by director Mikko Makela, this emotionally arresting feature debut deserves to be heaped with the same praise that Francis Lee’s debut was afforded upon its premiere earlier this year. This is a far more subtle proposition than God’s Own Country, yet it still has plenty to say on love, sexuality and immigration, all wrapped up in one of the year’s most moving romance narratives.

Here, a relationship slowly blossoms between Tareeq (Boodi Kabbani), a Syrian immigrant finding it hard to adapt to life in Finland, and Leevi (Jaume Puustinen), who has returned to Finland from Paris to help his dad fix up their lake house ready to put on the market. When Leevi’s father is called away on a few days for a business trip, the two men slowly get to know each other- growing into a rich, tender and affecting relationship as they finally make the meaningful bonds that have alluded them during their time in Finland.

Both actors deserve credit for accurately conveying an initial social awkwardness that slowly blossoms into something deeper; both speaking in English, as Tareeq is unfamiliar with Finnish, their subtle transition from being uncomfortable speaking in a foreign tongue, to being able to fluently communicate their emotions as they develop stronger feelings for each other, is winningly underplayed by both actors. During the film’s sexually charged, most intimate moments, the two actors have done such a perfect job cementing a believable relationship between the characters that no sex scene feels exploitative – they feel essential to the narrative, and all depicted in a beautifully loving way.

After initial trepidation due to the familiar narrative, A Moment in the Reeds quickly became my biggest surprise of the London Film Festival. It’s a wonderful romance that deserves to not only be mentioned in the same breath as God’s Own Country, but be allowed to stand alongside it as one of the most moving gay romance stories of recent years. 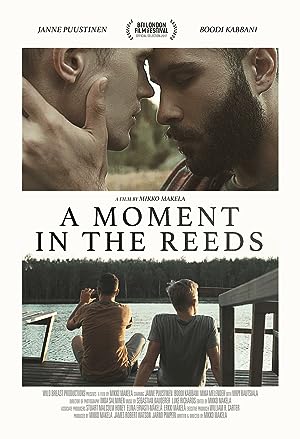 A Moment in the Reeds (2017)
108 min|Drama, Romance|29 Jun 2018
6.8Rating: 6.8 / 10 from 780 users
Having moved to Paris for university, Leevi returns to his native Finland for the summer to help his estranged father renovate the family lake house so it can be sold. Tareq, a recent …
Director: Mikko Makela
Creator: Mikko Makela
Actors: Janne Puustinen, Boodi Kabbani, Mika Melender, Virpi Rautsiala