The lives of two brothers, who live in N’djamena, are upended when they awake one Saturday morning to find that their father has left the family. They are Amine, about eight years old, playful and asthmatic, and Tahir, 15, handsome, quiet, his brother’s protector. The boys go in search of their father, and find only trouble. Dad’s leaving also debilitates their mother. The movies, a musical uncle, a village Koran school, a poster of a Moroccan beach, and a young deaf woman figure in the resolution. Is there any place for happiness, or is happiness only in storybooks?

I really felt like I got to know something about Amine and Tahir, as well as their African land and people. The cinematography is calm, reflective and colorful. It was interesting how the story skipped over climactic points, leaving it to the viewer to fill in what was being led up to.

Perhaps most remarkable is that the film held the complete attention of my seven year old brother. At one stage he said “I know where he left his medicine”. This is proof that story still has power and that the non-stop eye candy of films like “Cars” is not all it’s made out to be. Abouna is a story well told. 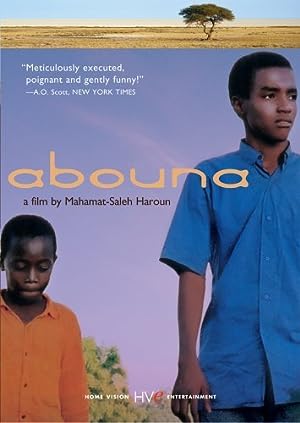 Abouna (2002)
84 min|Drama|19 Mar 2003
6.7Rating: 6.7 / 10 from 463 users
The lives of two brothers, who live in N'djamena, are upended when they awake one Saturday morning to find that their father has left the family. They are Amine, about eight years old, …
Director: Mahamat-Saleh Haroun
Creator: Mahamat-Saleh Haroun
Actors: Ahidjo Mahamat Moussa, Hamza Moctar Aguid, Zara Haroun, Mounira Khalil