At the age of 13, Rafael Bregman has already lost his virginity, but has never kissed a girl. With his pimple-riddled face, his dysfunctional family, and a lowered self-esteem, getting this much anticipated first kiss proves trickier than expected. It’s now time for Rafa to build up some self confidence and attract the attention of his class mate, Nicole…

This is a kid who gets all the money he wants (he can even wake his parents up in the middle of the night to ask for money, no problem), who goes regularly to brothels at age 13, who takes piano, tennis and karate lessons and doesn’t seem to enjoy neither. And we are supposed to care for him because he has a fierce acne attack (for which, after seeing several specialists, he is taking the most expensive medicine in the market, without much improvement) and because he has never kissed a girl? Character identification really fails in this movie, and there’s not much of an ironic distance, either.

Neither we learn much about the Jewish community in Montevideo, which is the supposed cultural backdrop. Well, maybe we do learn a couple of things: that they do fairly well, and that your classmates will laugh at you if your father happens to be a bricklayer.

This is not a badly made movie, only a pointless one. 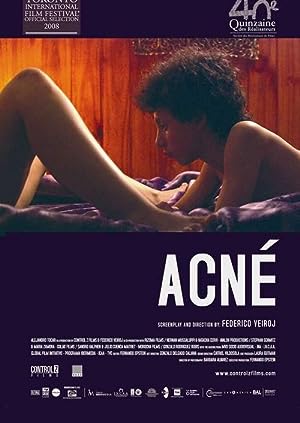 1 review for Acne 2008 with English Subtitles