In 1974, a group of 11-year-old boys spend the last carefree summer of their childhood, unaware that the world of grown-ups, with its loves, passions, prejudices and curses, is about to seal their fate. Aaron, Stelios, Sakis, Galanos and Verios, “the acrobats”, are best friends. School has closed for the summer holidays and the children spend their time playing games, running errands, and riding their bikes. Life is a game, into which they channel all their physical energy and imagination. They practice their diving abilities in a big cistern. It is a game through which their special talents and competitive spirit unfold. One is good at balancing acts, another at diving and another at somersaults. It is in this neighborhood that Aaron will spend the most important summer of his life: a rite of passage from childhood to adolescence, a time for learning about love, jealousy and friendship.

A thoroughly enjoyable film which at times becomes quite dark, but the balance is cleverly restored with humorous scenes. It offers an interesting insight into Greek culture yet makes itself appealing to an international audience! 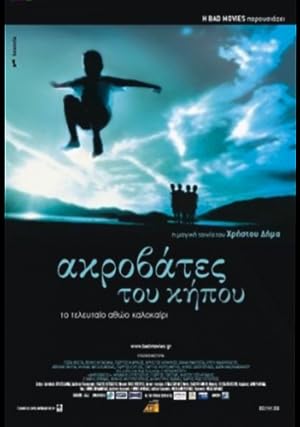 The Cistern (2001)
110 min|Drama|08 Nov 2002
6.7Rating: 6.7 / 10 from 114 users
In 1974, a group of 11-year-old boys spend the last carefree summer of their childhood, unaware that the world of grown-ups, with its loves, passions, prejudices and curses, is about to …
Director: Christos Dimas
Creator: Christos Dimas (novel), Christos Dimas (screenplay)
Actors: Yiota Festa, Themis Bazaka, Giorgos Marinos, Michalis Evripiotis