After the death of their mother, Irish youngsters Dara and Eoin are moved to France to stay with their aunt. There, the boys befriend a local English family and the impressionable Dara falls under the spell of their young daughter Bella. But when she begins to pull away, Dara’s feelings for her start to get out of hand.

In her debut feature film, director and writer Alicia Duffy gives a whole new meaning to obsession and, in turn, puppy love. After their mother dies, brothers Dara (Jack Gleeson) and Eoin (David Brazil) head to France to pass away the summer time with their Aunt Lynne (Kate Duchene). Clearly, the teenage lads are still very shaken with the loss of their mother as evident with the relationship they keep with their mom’s cat. The boys cling to this cat in the night and assume the maternal role for the pet. Also, the boys move to France, a place where they do not speak the language all that well, ensuring their new land is foreign in every respect.

During an excursion, Dara comes across what appears to be an abandoned mansion. We learn a family lives there and, in particular, a young girl named Bella (Imogen Jones). Dara immediately becomes smitten with Bella and after a series of events; her family prohibits Dara to visit anymore à la Romeo & Juliet sans the Juliet loving Romeo part. Bella seems to know the hold she has over Dara, but chooses to fancy his brother Eoin instead, despite his piercing baby-blue eyes.

Dara begins spying and seeing Bella and Eoin together, igniting quite a jealous and adult-like rage. The ending is not one you anticipate coming and elicits some pretty powerful acting from such young stars. Gleeson shines in this leading role and brings quite a mysterious, yet intriguing feeling to viewers.

Aside from the child acting, the adult acting is very minimal. There’s really no character development between the young boys and their father, or the aunt for that matter. It sort of feels like a childhood cartoon where all the focus is on the babies and the parents come in and out from time to time.

Regardless, All Good Children champions childhood love. That love that makes you feel like your head will explode. That you can’t breathe. That you’d do just about anything for that person. A selfless love. But like all good morals, we learn what can happen when a young child gets too caught up in the emotions and leaves the real world for this new realm of happiness they create. 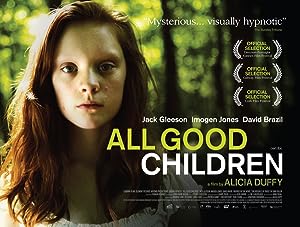 All Good Children (2010)
N/A|Drama|27 Dec 2010
5.6Rating: 5.6 / 10 from 197 users
After the death of their mother, Irish youngsters Dara and Eoin are moved to France to stay with their aunt. There, the boys befriend a local English family and the impressionable Dara …
Director: Alicia Duffy
Actors: Jack Gleeson, Imogen Jones, David Brazil, Austin Moulton