A down-on-his-luck bookie befriends an ex-girlfriend’s son and begins taking bets on his youth league baseball games, creating chaos in the community.

Being a huge Michael Kelly fan, I couldn’t wait for this movie, All Square, to come out. He adeptly plays the role of John “Zibs” Zbikowski, a morally challenged man who does what he feels he needs to do to get by as he journeys through the residuals of his hard-knock life.

Zibs, a bookie, down and out, finds an opportunity to take bets on little league baseball games in a small-town community. Having attended more than a few children’s sports games in my time, the action and ambition of the parents at these baseball games was funny and spot on.

This story subtly shows us that life is full of challenges, and the road we travel on is always full of choices, and not always easy ones to make. Sometimes we make the best decision-other times we don’t. No matter what, we live with the repercussions of those choices.

My favorite part of the film was the relationship established between Zibs and his ex-girlfriend’s twelve-year-old, wanna-be baseball pitcher son named Brian, who was flawlessly played by Jesse Ray Sheps. These two actors have a great on-screen chemistry. Zibs, in spite of his mis-deeds, is likable and an inherently good-hearted man.

Another aspect of the movie that shows how the decisions we make impact our lives is skillfully shown in the relationship between Zibs and his father, Bob, (played by Harris Yulin).

This movie, reminds us that we are our choices, and we are often given the opportunity to re-direct our lives based on those choices we make. The impact of what we decide to do may be life altering or simply a small step forward toward a different life path. The message of this terrific film is delivered through an engrossing story that is demonstrated through humor, in a delicately complex and understated way.

Thrillers and high-action films are great, but I wish they’d make more unique movies like All Square. I highly recommend it. 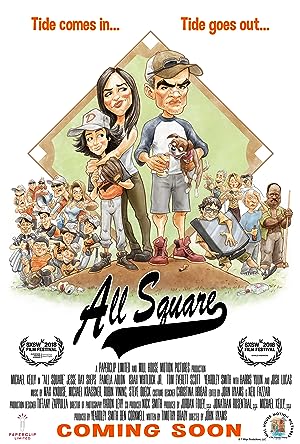 Be the first to review “All Square 2018” Cancel reply