All Things Fair 1995 with English Subtitles

Malmö, Sweden during the Second World War. Stig is a 15 year old pupil on the verge of adulthood. Viola is 37 years old and his teacher. He is attracted by her beauty and maturity. She is drawn to him by his youth and innocence, a god-sent relief from her drunk and miserable husband. They start a passionate and forbidden relationship – but it has consequences they never could have expected.

How much I regret the passing of director Bo Widerberg who can create a film such as this one with its dramatic portrayal of human problems, human relationships and human emotions. It was not so much the dialogue but more the unspoken words that grabbed my attention and held me to the end. A long silence can be filled with meaning….a stolen look, a fleeting glance, a flicker of a smile, a movement of the eye….all these subtle messages electrify the air between Viola the teacher and Stig the student in the class room. We know at once that in some magical way their lives have been drawn together and as we are caught up in the drama we seem to know that eventually the ending will not be a happy one.

Under the guise of having special coaching lessons, Stig gains entrance into his married teacher’s household after his evening cinema job. Shy at first he soon experiences the delights of a continuing relationship with Viola who is a very competent teacher in all respects. Perhaps we can pardon Viola for her “cradle snatching” when we find out that her husband has taken to drink and seems almost permanently drunk.

The love scenes are sensitively handled and the remarkable changes which develop in the characters create an imposing piece of cinema. Stig seems to take on a degree of security in a scene where he accuses the husband of the impossible situation. But who is really to blame? That is the intriguing part of the film.

There are some aspects that are not explained thus the viewer becomes involved. As for the stolen encyclopaedia, why would Stig carry them off. Is he just in a vindictive mood and does it just to annoy Viola or have those volumes become special to him because they belonged to Viola. 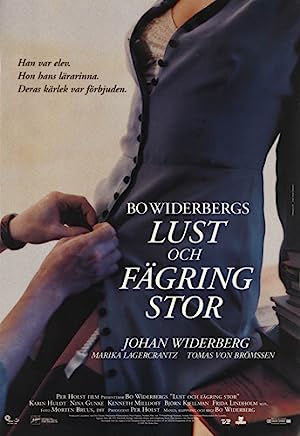 All Things Fair (1995)
130 min|Drama, Romance, War|08 Mar 1996
7.0Rating: 7.0 / 10 from 5,025 users
Malmö, Sweden during the Second World War. Stig is a 15 year old pupil on the verge of adulthood. Viola is 37 years old and his teacher. He is attracted by her beauty and maturity. She is …
Director: Bo Widerberg
Creator: Bo Widerberg
Actors: Johan Widerberg, Marika Lagercrantz, Tomas von Brömssen, Karin Huldt