After moving to Amsterdam, Tygo gives a class talk about Carnival. What starts as a general explanation of the festival, turns into a personal poignant account. Although his father always says that anything goes with Carnival, his father also shows him that even with Carnival, one can go too far.

Carnival is for eleven Tygo (Lars Jennissen) and his parents very important. Not only did his parents met once during Carnival, they also all have an active role in the carnival. The family lives in the Brabant Sint-Oedenrode (Papgat called during Carnival). Father (Patrick Stoof) ever even been Prince Carnival, is in a brass band, he plays the bass drum. Tygo itself also plays in the brass band, but he would much prefer his majorette. But that should not Tygo’s father, because “that’s just for girls”. Tygo’s mother (Ricky Koole), which is originally from Amsterdam, makes all the costumes, not only for the brass band but also for the majorettes. It is more flexible. Would Tygo and his mother manage to get father?
In short, by the VPRO produced film ‘Anything goes’ we see Tygo at school, just before he has to give a talk. The topic was rather obvious, of course carnival! He has made a lot of work. The laminated cards with key words, the flag Papgat, the sting of his father, it looks impressive (especially compared to his classmate who had just been getting stuck his speech read out of a scrap of paper). Unperturbed Tygo gives his presentation. The master listens attentively, and initially his classmates what they call giggly or nasty comments, but as Tygo’s story progresses, they also get impressed. Tygo’s speech is so personal and emotional, that a ten almost can not stay out.
‘Anything goes’ does convincingly a family history revealed in a short time. Not everything is pre-chewed, but that is not necessary. As in “Giovanni and the water ballet ‘, a documentary about a boy who sits on synchronized swimming, the only between the girls opt in’ Anything goes’ a boy for a girl hobby. If these films can contribute to the acceptance of young people (themselves but also certain outsiders) who choose their own path, even if not immediately obvious, this is a bonus. But above all, “Everything should” just a great family film with good acting and a beautiful view of the carnival season. Not for nothing, the short film has already managed to bring in a truckload of awards. won awards’ should all “to include Cinekid in Oberhausen, Toronto and the first Dutch youth film team received an Emmy Kids Awards in February 2015. (google translate) 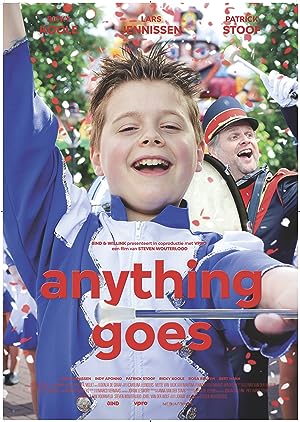 Be the first to review “Alles mag 2014” Cancel reply