Adolescent curiosities and sexual explorations of a 15-year-old boy named Antonio who’s just coming to terms with his sexuality. Through Antonio’s mother and friends, we get an interesting look at what people in Manila think about homosexuality and gay people. Antonio’s life takes a turn when his uncle comes to stay with him and his mother

Ang Lihim Ni Antonio’ (Antonio’s Secret) deals with the sexual curiosities and explorations of an teenage boy, who is just coming to terms with his sexuality. It gives us an interesting glimpse into what goes on in his mind, as well as what his mother and and close friend think about it.

Except the stabbing scene (which isn’t believably carried out), all scenes are well-acted, especially the rape scene.

The mother’s character is well-explored as well, and Shamaine Buencamino gives a commendable performance. The conversations between Antonio and his friend, and Antonio and his mother are quite interesting.

Overall, the film gives us an interesting look at adolescence and sexuality. 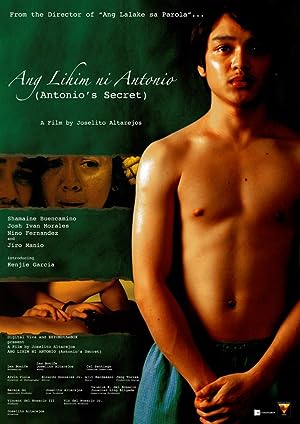