In a dank and dirty public toilet loiters a semi-naked youth with tattered wings. From time to time, men enter, urinate and excrete, wash and leave, unaware of the figure watching them. Then a moustachoied figure in a tank top reaches out to him, to fuck him silently in one of the stalls. Lost in reverie, the angel grips his anonymous lover tightly.

Hours pass, perhaps days. Men come and go, most
unseeing. Bored and playful, the angel waits for those who see him, staring out from time to time at the world outside. Memories flash before him, of the time before he became an angel and of the young man he loved.

Angel in the Toilet, Imaizumi Koichi’s 1999 short (33 min), wordless film, starring Narumi Hiroki and enhanced by Iwasa Hiroki’s spare music, is a minor masterpiece. Its visual poetry encompasses eroticism, longing, humour and lingers in the memory long after the final credits have rolled.

Three years later, Koichi wrote and directed the full-length (75 min) Naughty Boys. The title may sound good in Japanese, but it’s misleading in English. It’s not pornography that Koichi offers, but a light-hearted look at love, fidelity and sexual desire.

Young salaryman Gacchan (Akio Yoshioka) is so busy having casual sex that he’s forgotten that it’s his own birthday, and he’s unaware that his lover, Takayuki (the very attractive Yuji Kuwa) has prepared a surprise dinner for him. Cue lover’s tiff and the monogamous Takayuki storming off to Tokyo’s gay Shinjuku district to find himself a one-night stand.

Of course life and the movies are not that easy. The night’s adventures include the gay bar where the mama-san pairs a reluctant Takayuji with an older man, a crazy aggressive drag queen and her acolytes, and the late-night fortune-teller who may or may not be a robot. Not to mention Gacchan watching his every move. But sunrise comes and with it handsome Keiichi eager to seduce him.

What begins as a soap opera turns into a meditation on how we deal with the vicissitudes of love. The subject matter is serious, but Koichi handles it with off-beat humour and style, as he extracts from his actors performances which are less professional than heart-felt. 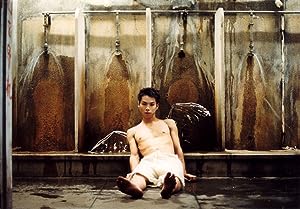