A fragmented account of the growing attraction between Celio (Maurício Destri) and Dario (Henrique Larré); two classmates who are brought together by a series of serendipitous encounters and their own naive curiosity. As they attempt to internally come to terms with their connection, Celio’s paramour, Sofia (Marcella Arnulf), takes it upon herself to decipher the feelings she knows exists between the two boys.

about book. and about a girl. and the silhouettes of two young men studying sideways.result – a beautiful, touching film. about emotions of an age, about life and shyness, about subtle forms of courage and about the wise girlfriend who knows all. puzzle of small pieces, it is one of the seductive films who becomes, after the end of film credits, a persistent flavor. because all is preserved in a delicate manner , with subtle grace. because it is more than a story about events before the first meet but inspired support for memories from high school period. because the Portuguese seems be the ideal vehicle for the dialogues in this case, for reflect the tension, the humor and the truth. a beautiful film. sure, it is not exactly the best definition but it represents a suggestion to see it. 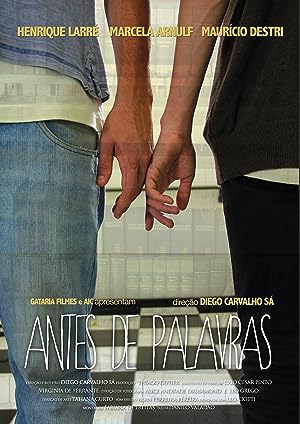 Be the first to review “Antes de Palavras 2013” Cancel reply