Neighborhood boy Todd Bowden (Renfro) discovers that an old man living on his block named Arthur Denker (Mackellan) is Nazi war criminal. Bowden confronts Denker and offers him a deal: Bowden will not go to the authorities if Denker tells him stories of the concentration camps in WWII. Denker agrees and Bowden starts visiting him regularly. The more stories Bowden hears, the more it affects his personality.

Young high school student Todd Bowden uncovers that an old man in his neighbourhood is really Nazi war criminal Kurt Dussander under the name of Arthur Denker. Bowden offers not to turn Dussander in if he agrees to tell him what it was like to carry out the crimes he did during the war. However the relationship changes both Dussander and Bowden, bringing evil to the surface in both of them.

Having read the short story prior to the film being made I knew that this was going to be a difficult subject to bring to the screen. The film does a good job but makes many changes that will disappoint those who know the book. Treating the film as a separate entity it isn’t bad but it happens too quickly and doesn’t go deep enough. The plot is interesting but the depth Todd sinks to isn’t convincing as half of it is forced on him and the other half he seems to embrace it. Dussander himself is well crafted but his descent into evil doesn’t go far enough to be truly captivating. The ending is different from the book but I’m in two minds if it works better or not.

Brad Renfro is good but I can’t help but compare him to the character in the book and see his short fallings. However he does manage to keep his changes semi-realistic without descending into being OTT or turning into a cartoon character. McKellen is perfect in the lead role and he manages to be larger than life. An actor of Koteas shouldn’t have done such a minor role but Schwimmer gives a good performance that isn’t his usual `Ross’ thing again.

It’s hard not to compare this to the book and beside that it pales slightly. As a film in it’s own right it’s OK but it doesn’t quite convince and has an uneasy tone to it. Singer was always going to have a tough time following the amazing Suspects, but here he does pretty well. The direction is great and features plenty of great shots throughout the film.

Overall it is a flawed film because it doesn’t go as far as it should nor does it manage to totally sell the characters to us. However it’s worth a watch for great direction by Singer and a good lead by McKellen. 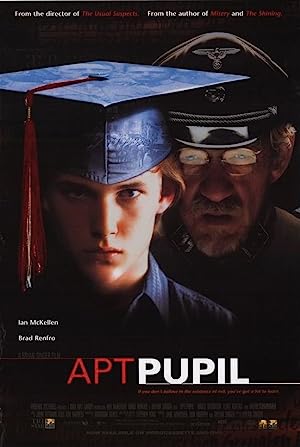 Be the first to review “Apt Pupil 1998” Cancel reply