Arhus by night 1989 with English Subtitles

A young CCG filmmaker about to start his first film on the big budget, a film about his own childhood. Follow the film’s laborious genesis: the idealistic and ambitious but immature instructor has problems with the cast and is also in love with the female lead actor. Even greater problems he has with the technical team from Copenhagen. The burly locals do not care much for the local residents, and they insist on time off in the evening, where to drink and scores ladies. (google translated)

Falling in love with one but making love to another; jilted, cheated on, moved beyond or passed over; choosing the right girl for the wrong reasons, and vice versa: these films are predominantly concerned with sexual desire and repression, the choices made based on both, and the repercussions on one’s character dealing with this repression through time—in thought, deed, mistake, acceptance, and understanding. Interactions between Malmros’ naïve male characters—all boys at their core—and his beaming girls—all women, even when young—are subtly staccato-like playing fields of attempts and ripostes, casual words and actions between boy and girl quietly weighed by each character as vital to the way each wants to live his or her life.

There is as much dialog as there is observation of that dialog by its participants, a sense of interactions between males and females, adults and children, as gaining and losing ground in a mysterious negotiation whose outward appearance may be things like sex or freedom but which are but the top layer of complex human questions. It is no mistake that the Lars Ole 5.C structures itself around recess-time gameplaying (and girls vs. boys tag at that) and ends on a dance (dancing being a common motif in Malmros’s cinema), as the kind of back-and-forth, gain-and-lose nature of these activities visualizes the moral territory of relationships through which these characters moves. These early films, as well as the later ones about older boys, and, eventually, adult men, reveal themselves to be constructed from a carefully measured series of decisions made by characters in particular life situations, decisions which ultimately aggregate to a dark, pointed edge. “It is a hazardous game you’re playing; I admire the experiences you’ll have,” says one character in Barbara (1997) to a young man on the precipice of deciding to getting married, and he could very well be talking, simply, of men navigating not just marriage and not just women but life, a treacherous but also thrilling embroilment of desires, reactions, and counter-reactions which may not create happiness but will create greater understanding. 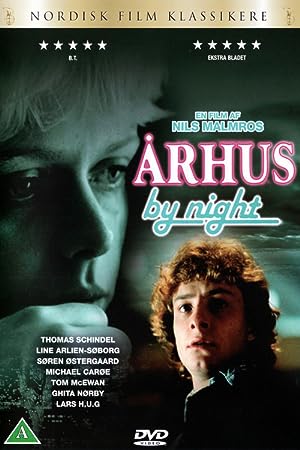 3 reviews for Arhus by night 1989 with English Subtitles