In 1944, upper class boy Julien Quentin and his brother François travel to Catholic boarding school in the countryside after vacations. Julien is a leader and good student and when the new student Jean Bonnet arrives in the school, they have friction in their relationship. However, Julien learns to respect Jean and discovers that he is Jewish and the priests are hiding him from the Nazis. They become best friends and Julien keeps the secret. When the priest Jean discovers that the servant Joseph is stealing supplies from the school to sell in the black market, he fires the youth. Sooner the Gestapo arrives at school to investigate the students and the priests that run and work in the boarding school.

This is a masterpiece of cinema, a work of genius by one of the greatest directors, Louis Malle. He does everything with the barest touch, just the slightest emphasis, without rancor or any loading of the deck. He understates and plays fair always. He has complete control of his story and of the audience. He knows what they believe and what they expect. He respects that, but he doesn’t cater, and he is very gentle about leading us to the conclusion. He makes it beautiful although it is horrible.

Gaspard Manesse as Julien and Raphael Fejto as Jean are unforgettable and a reminder that in film it’s important to have a good cast. Yet, I suspect Malle could have made geniuses of any number of talented young boys in their parts. This is your Catholic boys school coming of age film without lecherous priests or the brutality of children; that is, no more than is necessary, just what is real and seen in perspective, the context being the Nazi occupation of France in 1944. It is amazing how Malle manages to show the bestiality and brain dead stupidity of the Nazis by presenting them at their most gentle. If one can damn by faint praise, one can destroy by contrast. Compared to what is human and natural we see the Nazis, as their pretentious Reich is falling apart, chasing after children, obsessed with psychotic racist delusions. Through the objective eyes of the children we see the evil. Malle need only let the facts speak for themselves.

I think artists working in any medium would benefit from study of this film.

What it says to us is be honest, be fair, keep it simple, but not too simple. Use not a brush stroke more than necessary, and pay attention to every detail, especially the small ones. But while we can learn from and appreciate, it takes genius to pull it off. It can’t be done by connecting the dots.

I am struck by a little irony on the jacket of the video. It has an early Siskel and Ebert quote: ‘One of the year’s best films.’ That’s a little embarrassing unless the year is a hundred years long.

Incidentally, the sublime, beautiful and wondrously talented Irène Jacob made her debut here in a small part as a piano teacher. 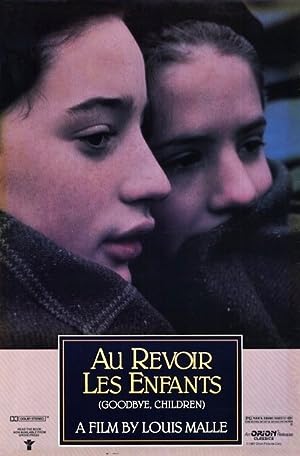