Martin, a young Argentine student, is exploring the reactions of his sports coach, Sebastian, while vying for his love and affection. He has an opportunity – one night to push the envelope and be as close as ever to reaching what he so desperately wants. With his teacher keeping him off at a distance, but at the same time being so kind and nurturing, Martin continues to inch further and further towards crossing the line. But, with all the twists and turns of love, life, and personas, Martin finds himself on the wrong side of the line, and Sebastian finds himself with more regret than Martin could have ever imagined.

I have just finished watching Marco Berger’s “Ausente”, and in spite of the Teddy award it won at the Berlin International Film Festival as Best Film with LGBT topic, I confess that all the enthusiasm that I felt when I saw “Plan B” vanished. All the freshness and sensuality of Berger’s first motion picture, with actors who seemed to be improvising scenes and lines (or maybe they were really doing it) to give us a sincere reflection on how to reach honest acceptance of our homo-erotic feelings, was here replaced by a flow of contrived, too coldly calculated movements, to create a melodrama (not in the best tango tradition, but more in a soapy middle class mold) which is often more corny than moving. The story of a professor’s harassment by his adolescent student, who is trying to seduce his teacher with lies, is slowly displaced by a subplot that pays too much attention to public opinion, prejudice, fear and slander, that is probably more in the mind of the instructor, who in the end is not as transparent as he had thought. Although Berger still favors setting up his camera at the level of men’s crotches in underwear while lying in bed, this time those shots seem tamed as he was too much assimilated (perhaps far too much) by the discreet charm of the Argentinean film industry and its frequent pomp (careful, I do not mean the other Argentinean cinema, so independent and liberating… and without Ricardo Darín in the leading role, of course!), with sugary music that even includes a little female voice doing “Aaahhh’s…” Both Carlos Echevarría as the professor and Javier de Pietro as the student are good, given the material they had to work with. 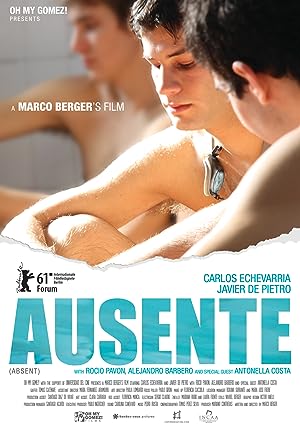 1 review for Ausente 2011 with English Subtitles