Single mum (father of child dead) from the country with 6th grade boy comes to Tokyo, leaves the boy to live with his uncle’s family – wife, male, female teens, run a struggling greengrocer – and lives/ works in local inn. He gets bullied/ fights with local boys, goes to the baths, plays basketball, is befriended by his male cousin and becomes friendly with grade 4 girl who’s the daughter of the innkeeper, who employs his mum and is the longterm mistress of a businessman from another town, who’s the girl’s father and who brings her half sister and brother to meet her but they’re mean to her. Meanwhile the boy’s mother gets friendly with one of the inn’s clients and chucks her job for a trip or something more permanent with him. The young girl takes him shopping, and wants the boy to live with her and her mother, but mother and father refuse so the two kids go to a seaside where he sprains his ankle and they’re late back even though the police get them and they’re in trouble. The boy loses his beetle and tries to get another for the girl for a school project but when he does, she’s moved house with her mother at the urging of her father. Clear? It’s better in the film.

This is a bit sad but great. Think Kes, the Railway Children and other great children’s classics. There’s sadness but never sentimentality because children just have to deal with what happens to them.

Here, the kids have single parents, other kids get at them, there’s uncertainty and dislocation. Responsible adults can be unfair and ignore or deceive their children. Still, they make friends, have interests and pastimes and are often looked after by friendly grownups, even if their parents aren’t perfect. As ever, the strong group culture of Japan, as portrayed, is supportive, even if sometimes oppressive.

The filming is wonderful, not a redundant interior or exterior shot in the pacey 78 minutes and the acting is great by all concerned. Several locations are used well and tied together with street and travel scenes.

Take your kids or not – you’ll love it. 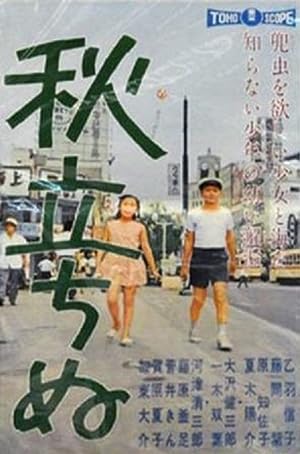 5 reviews for Autumn Has Already Started 1960 with English Subtitles