September, 1945. Sebastian impatiently waits for the return of his friend Angelina, whom he has not seen for two years. When the plane carrying the young woman to her small village in the Alps is reported to have crashed in the mountains, Sebastian is convinced that Angelina is still alive. Along with his faithful dog Belle, Sebastian embarks on the most dangerous adventure of his life . . .

This sequel to the already fine film from 2013 reunite us with Sebastien and his beautiful canine companion belle 2 years after the original.War is finally over and Angelina is heading home to Cesar and Sebastien but her plane crash.Everyone believes she his dead but Cesar and Sebastien who enlist the help of Sebastien biological dad in order to find her. It’s a question of taste but I personally has found this follow up more interesting.The first one was nice but character development took a back seat for the war storyline, I never felt it really got into the skin of little Sebastien and Belle but this time Belle and Sebastien is really deserving of it’s title as the two are now the true heroes of this film and it has a much bigger emotional core because of the Father/Son meeting for the first time and them bonding as the story progress. The new director does a great job, the cinematography still deliver the beauty of the Alpes and it really is a feel good film.The actors are all great, the little boy who play Sebastien is extremely natural and he his in a way a better actor then two years ago. However, I can’t really recommend this film to people who have not watched the first film as it does not make any introduction of the characters, it really is a continuation (The second film in a trilogy). I enjoyed it greatly and am looking forward the third and final film. 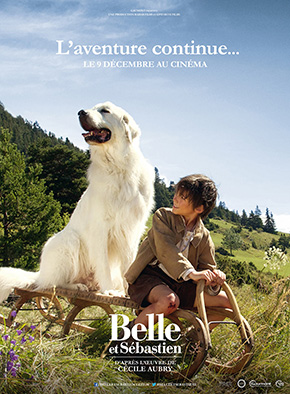