Teenage friends find their lives upended by the wonders and horrors of puberty.

Now, this topic is rarely discussed like it’s not a thing, but it is and many girls and boys feel alone about it. This show not only isn’t afraid to talk about it, but it makes it hilarious and “normal”.

The show is rated MA (mature audiences) so expect some adult content. I mean, the whole show does revolve around going through changes.

Nick and Andrew are the two main boys who are awkward, tweens then there’s Jay – also a tween with an over-sexualized imagination – and Jessi and Missy are the two main girls. The Hormone Monster and The Hormone Monstress guide the opposite sex on their journey through puberty. Add ghosts, a talking Statue of Liberty and genitals that have eyes and you can’t get more hilarious than that.

10/10 would recommend. Puberty doesn’t have to be an uncomfortable topic and that’s what Big Mouth strives to teach. 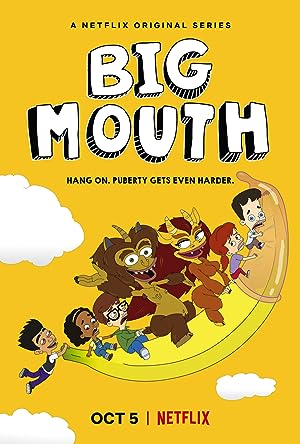