In the middle of the 18th Century, the Ruster family immigrates to the United States. The father, a former farm laborer, leads a hard life as a settler along with his family. One day the nine year-old George, his second-youngest son, is kidnapped by Iroquois. He is taken in by an Indian family in the place of a deceased son and receives the name “Blue Bird.” The boy has homesickness and difficulties accustoming to the customs of the Indians. But gradually he begins to feel at home with them, and advances to a full-fledged member of his new community. As the regular white settlers are attacked, he feels more associated with the Indians than with his former people. After the victory of the English over the French in 1763, all of the captured white settlers are to be exchanged for the captured Indians, including George/Blue Bird. He decides to remain with the Indians.

George, the ten year old son of English settlers in midwestern America apparently about the time of the French and Indian Wars, is kidnapped by a native tribe and taken to their village. At first, you don’t know what their intentions are toward the boy who is played by Robin Jaeger. When he is stripped, painted black and held under water, you think it may be some kind of ritual murder. However, it’s only part of his initiation into the tribe. Renamed “Blauvogel” (Blue Hawk), he spends the next several years being raised by the Indians, who prove to be kind and probably more virtuous than the Europeans from which he came. Eventually, he is returned to his English family, but finds the readjustment difficult, particularly as they do not have the same respect for nature as the American natives. 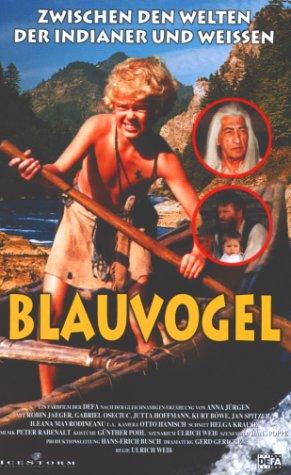