Bullying is taken to unimaginable extremes when a student is raped at an exclusive private boys school.

A truly horrifying film–even if you know what’s coming, seeing it executed may be too much for some viewers. When Gareth(the young gay protagonist) is pinned against a locker by Nick (the swimmer he’s been admiring), the use of silence is almost unbearable; we hear him saying all the wrong things to Nick (“You like this human form?””Maybe”) and the pauses reverberate with our silent protests (what is supposed to happen in Pinter, but rarely does). We can see the terrible decision the other boys make, yet thedirector skillfully draws out the next few seconds before the point ofno return is reached, until we’re ready to scream. The actual act takes only a couple of minutes, but they’re some of the longest minutes incinema. And the final shot on the dining room floor is deeply, deeply sad; it posits the idea that some people are so damaged they will take love from monsters. 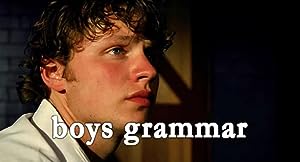