A father takes his son to tour colleges on the East Coast and meets up with an old friend who makes him feel inferior about his life’s choices.

“Brad’s Status ” (2017 release; 101 min.) brings the story of Brad and his HS senior kid Troy on a college-shopping trip. As the movie opens, Brad, a middle-age guy in Sacramento who runs a very small non-profit agency, tosses and turns in bed while he thinks about the wealth and fame his college friends from yesteryear gained. Next morning, Brad and Troy fly out to Boston for the first of several college campus visits and interviews. Troy’s HS adviser thinks that Troy is Harvard-worthy, much too Brad’s delight. But when they get to Harvard, it turns out that Troy had mixed up the dates and hence he is denied an interview. Brad decides to pull out all stops and contacts his erstwhile college friend (and now TV personality) Craig… At this point we’re less than 15 min. into the movie, but to tell you more of the plot would spoil your viewing experience, you’ll just have to see for yourself how it all plays out.

Couple of comments: this is the second directing stint from writer and sometimes actor Mike White, who just earlier this year wrote the interesting (and divisive) “Beatriz At Dinner”. Here White tackles the insecurities of a guy approaching 50 and wondering whether he is a failure in life (“the world hates me, and the feeling is mutual”, Brad ponders in the movie’s voice-over). Or whether he’s missed out on what could have been {“all the lives I would never live”, Brad sighs, and “there is no more potential, this is it!”). If you are looking for a feel-good movie, you are definitely not interested in this movie. Brad, as portrayed by Ben Stiller, is brooding and moody almost the entire time throughout the movie, as he simply cannot get over the fact that life seems to have passed him by. The movie is billed as a comedy-drama, and I think that must be an unintended typo, as there really is nothing funny about the movie (unless a grumpy middle-aged white guy is your idea of funny). All that said, the movie flashed by in no time, as we’re curious to find out of course whether Troy makes it into Harvard. Austin Abrams, best known for his TV role in the Walking Dead, more than holds his own in his portrayal of Troy. But the movie is frankly stolen by relative newcomer Shazi Raja (as the Harvard student), and surely we have not seen the last of her. Last but not least, there is a nice orchestral score, composed by none other than Mark Mothersbaugh (yes, he of Devo!).

“Brad’s Status” opened this weekend at my local art-house theater here in Cincinnati and I couldn’t wait to see it. The Saturday matinée screening where I saw this at was attended so-so (even taking into account it was a matinée). Frankly, given the gloomy atmosphere that seeps throughout the movie, I can’t see this playing long in theaters, but maybe this will gain a wider audience on Amazon Instant Video (already playing there as well—this is after all an Amazon Studios release) or eventually on DVD/Blu-ray. Check it out and draw your own conclusion. 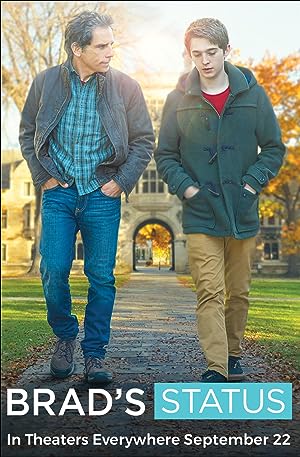 Be the first to review “Brad’s Status 2017” Cancel reply