Bringing Up Bobby is the story of a European con-artist and her son Bobby, who find themselves in Oklahoma in an effort to escape her past and build a better future. Olive and Bobby blithely charm their way from one adventure to another until Olive’s criminal past catches up with her. Consequently, she must make a choice: continue with a life of crime or leave the person she loves most in an effort to give Bobby a proper chance in life.

I liked Famke Janssen’s directorial debut, which was made on an austere budget and shot in Oklahoma in just 20 days, well enough to want to see her next film, which I hope there will be, as it is difficult to make this kind of independent film and release it.

In this film, Milla Jovovich is what she excels in being, which is enchanting and mesmerizing on several levels, as she portrays a loving but dysfunctional mother in a way that draws you in and makes you empathize as well as sympathize.

Famke Janssen’s story is original, the locations are great, as is the cinematography, and the scenes are cut together flawlessly, building a sensible arch of narrative and emotion to a worthy conclusion. 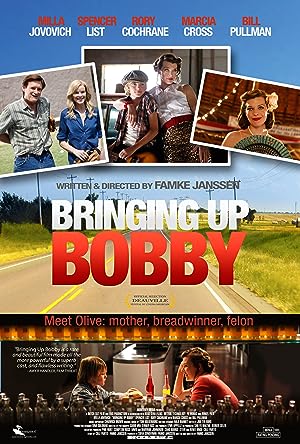 Bringing Up Bobby (2011)
93 min|Comedy|N/A
5.2Rating: 5.2 / 10 from 1,702 users
A con artist moves her son to a conservative neighborhood in Oklahoma in an effort to build a better future, but it doesn't take long for her past to catch up with her, and for her son's behavior to cause problems of its own.
Director: Famke Janssen
Creator: Cole Frates (story), Famke Janssen (story), Famke Janssen
Actors: Milla Jovovich, Spencer List, Don Kruizinga, Rory Cochrane

Be the first to review “Bringing Up Bobby 2011” Cancel reply