A young boy has lost his mother and is losing touch with his father and the world around him. Then he meets Hesher who manages to make his life even more chaotic.

I admit, it is a taboo for crewmen on a film to make a comment about it… sometimes you can be sued and can often breed bad mojo. However, I extend my neck on the chopping block for this film because not only because a few months of my life were spent on 14+ hours days with this cast/ crew/ and director but it was a… unique… project.

This was an unusual film to work on. Start with a Writer/Director who’s fervently passionate about his work (…okay, I’ve seen that before) but with a twist. Add an almost impossible idealism in a man of school boy enthusiasm whose facial expression varied between, “I won the girl of my dreams,” “Yeah, that’s it… but do it again(and again)” to watching that hopeful idealism melt away as though you just told the persevering child that ha-ha you won’t be an astronaut but rather a feeble emasculated yes man to a control freak wife. To say the Director was passionate about making his story real, real meaning matching that fully developed story that had vividly existed in the inner invaginations of his brain for years, doesn’t begin to convey the sheer depth of it.

Firstly, the cast was phenomenal. Mr. Wilson especially was an amazing actor to watch perform. It is a subtle character of nominal lines but without a word he was able to convey an impressive character. The production could not have hoped for a better casting in this part.

Mr. Levitt was, as I believe most already know, a pro. His professionalism and seemingly innate ability to portray his character, to bring his character to life, was amazing to watch and a pleasure to work with.

Now we come to Devin as T.J. The lengths this gentleman was put to was intense. Yet never a complaint. Brushed himself off, caught his breath, and did it again. My compliments to Devin for his amazing dedication to his character and this film. I’ve never seen a new actor his age work so hard, diligently, and without complaint.

Now to the film. The script is not easy to read, painful in fact as the dialog slaps you in the face at least every other line. I confess I had my apprehensions at first… it seemed just too much.

However, these apprehensions faded as the type of the script was performed to the mind’s eye of the Director and Cast. This film is very much about the not said, but the movements/ actions/ expressions. The subtle, and the beneath the surface story that is so much closer to truth and reality and than the superficial first glance.

Look at the typeface only, and the superficial facade of the characters will be all you see and doing so will fall nicely in line with the design of the characters’ protective layers. Scratch deeper, or simply pay attention to what the characters are really portraying… The moorings and underpinnings in these characterizations, and how they combine into the plot, gives a profound yet simplistic look at human behavior and how people cope with identity, loss, and the need to be loved.

My hat off to this amazing cast, it’s crew, and Mr. Susser. 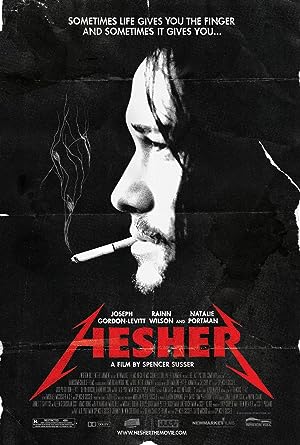 Hesher (2010)
106 min|Comedy, Drama|25 Jun 2011
7.0Rating: 7.0 / 10 from 48,245 users
A young boy has lost his mother and is losing touch with his father and the world around him. Then he meets Hesher who manages to make his life even more chaotic.
Director: Spencer Susser
Creator: Spencer Susser, David Michôd, Brian Charles Frank (story)
Actors: Joseph Gordon-Levitt, Devin Brochu, Rainn Wilson, Piper Laurie