Based on a true story of two brothers in 1970’s Ohio. It tells of their abandonment by their alcoholic parents and how the brothers turned to each other for support.

Deprived of a caring father or a loving mother, two brothers must fend for themselves in the midst of their parents’ rampaging alcoholism. It’s often said in psychoanalytic theory that the name of the father is the ultimate authority, which inscribes the child into the symbolic order. But what authority can be obtained from a parental figure that lives in constant stupor and drunkenness? Clearly, there is no such thing as a valid name of the father in the lives of these two kids, and perhaps that’s why there are no clear rules for them save for survival, which in this case means to take care of each other. As the younger brother, aged 12, keeps wetting the bed, the older brother takes him to his bedroom, and helps him to get naked so that he can clean him up.

The child is very fond of the teenager, and looks up to him. There is no real affection towards mothers or fathers here, only brotherly love. Soon, the proximity of the two kids as they start sharing the same bed awakens something. Sexuality irrupts strongly for the child who experiences his first erection as he feels his brother’s body pressed against his.

In a house ruled by two alcoholic adults, these underage kids find a special comfort and refugee in one of western civilization’s oldest taboos: incest. There is an in-between area of sexual ambiguity, do they experience sex as a manifestation of carnality or rather as the one instance in which they can redefine their roles without fears or worries about the specular images of adulthood (their parents), and by extension, society? Carefully devised, J.C. Oliva’s short film circumvents controversy by offering us poetic images and flashbacks sequences that makes us understand why these characters do what they do, without judging them or exploiting them. 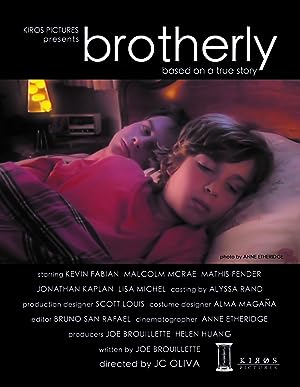 Brotherly (2008)
11 min|Short, Drama|03 May 2008
6.7Rating: 6.7 / 10 from 437 users
Based on a true story of two brothers in 1970s Ohio. It tells of their abandonment by their alcoholic parents and how the brothers turned to each other for support.
Director: J.C. Oliva
Creator: Joe Brouillette (screenplay)
Actors: Kevin Fabian, Malcolm McRae, Mathis Fender, Jonathan Robert Kaplan