A woman’s schizophrenia affects her relationships with her husband and son.

This is a small little film that slipped in under the radar–the sort of film that probably never made it to your local theater and you’ve probably never heard of it. That’s a real shame, as it’s a wonderful film about a real and very serious problem–schizophrenia. Despite the seriousness of the problem (affecting about 1% of the public and indirectly affecting many others), very few films seriously deal with it. Well, here there is an amazingly realistic portrayal of a mother decompensating, but the real focus on the film is her family and their relationships with each other. In particular, her elementary-aged son, as he struggles to understand what’s happening with Mom as well as eventually coming to terms with the reality that she’s probably never going to be “normal” again. It was a brave decision not to give this film a clear or happy ending–as life with this illness rarely is like a movie.

Very insightful, heart-felt and real–this is a film I would like to use when I teach my psychology classes about the illness. If schizophrenia has affected someone you love, then this is a must-see. For others, I still recommend it, as you’ll learn a lot and despite the tears, you’ll also see some amazing acting and writing.

FYI–Joe Pantoliano not only starred in this film but he produced the film as well. Joseph Greco both wrote and directed it. Great job. 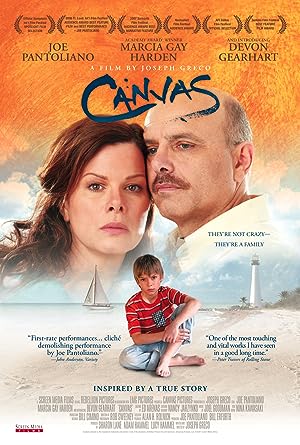 Be the first to review “Canvas 2006” Cancel reply