A young Algerian paperboy with friends and associates of all ages on both sides of the conflict experiences history leading up to the March 1962 independence of Algeria, witnesses ruthless violence perpetrated by French and Arabs, sees his French friends depart or die, and tries to relate to his patriotic French soccer pal to the end.

This was probably my favourite film at the Cannes Film Festival, and a bit of a surprise package. I hadn’t heard much about it beforehand, but decided to take the gamble as it fitted very nicely into my schedule. And what a pleasant surprise!

A film on a subject as heavy as the French withdrawal from Algeria could be rather full-on, and it definitely was in parts, but what kept this piece going was the portrayal of the issue through the eyes of the children involved, both native Algerian and French expats. This device allowed for so many different aspects of the situation to be explored, and without judgement imposed.

The cinematography was a delight to watch, and the framing choices (such as the promo image of the boy staring out the back of the car) superb. The setting was so interesting as well, particularly to someone who didn’t know a great deal about the situation.

The performances in Cartouches Gauloises are beautiful, unselfconscious, and subtle, particularly those of the children, and seeing the actors and director up on stage following the screening, you could tell how proud they were of the piece. They received a standing ovation at Cannes, and well- deserved too. One of the little boys couldn’t stop the tears from spilling down his face, so sweet!

I would highly recommend this film to anyone who is a fan of world cinema. 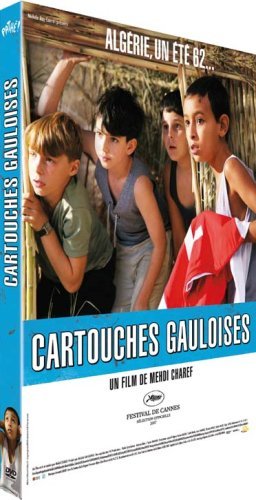