A film adaptation of the book by the same name written by Günter Grass. Pilenz, the narrator, revisits places of his WWII childhood in Nazi Germany, going through memories regarding his relationship to Mahlke, an old “friend” of his.

Though I have no knowledge about the political background of Germany during the Nazi era, and though I don’t have any ideas about what “Cat and Mouse” stands for, I still think this film is truly great. What I like the most about this film is the techniques. There are many surreal scenes in this film. These surreal scenes, which contain some deep meanings unknown to me, are sometimes very funny, sometimes very haunting, and most of them are full of undescribable feelings. Many scenes are shocking, sad, nostalgic, and beautiful at the same time, especially the scenes when the characters are suddenly and amazingly transformed into deformed dolls. I feel like laughing everytime the cat appears, though I don’t know why the cat has that effect on me. The scene when the boy is dancing on the ship is also outstanding. I wish this film or its director could be as famous as, if not more than, “The Tin Drum” or “If.” “Cat and Mouse”, while as sharply satirical as those two films, still has a profound effect on personal feelings. Though I don’t know how well this film reflects the political, military, social, or historical issues, at least I know that, after seeing this movie, I looked at cats in a different way for some time. 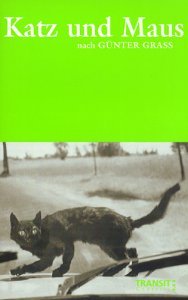 Be the first to review “Cat and Mouse 1967” Cancel reply