Neglected 13 year old Aloysha is cast in a cheesecake commercial and becomes obsessed with the idea of having a “perfect family” of his own, at any cost.

Three people from totally different backgrounds are cast in a commercial promoting a wholesome dessert: Mikhail the physician (Sergei Chonishvili), Natasha the professional actress (Olga Lomonosova), and thirteen-year-old Alyosha, cast “right off the street”. They portray such an idealized family for the ad that Alyosha decides that he will stop at nothing to make his life as perfect as the one he ‘played on TV’…

Director Eugene Zvezdakov’s deft hand guides the subtle script by Elena Dolgopyat to slowly and carefully bring the viewer to the surprising ending, aided by a fine score by Daniel Kalashnik.

A great example of the new direction in Russian ‘Indie’ film making; an outstanding performance from Pavel Melenchuk, virtually unknown outside of Russia, as Alyosha, anchors this beautifully made psychological thriller, a sleeper even in Russia. 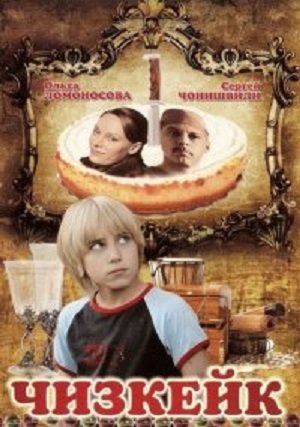 Cheesecake (2008)
86 min|Drama, Thriller|N/A
7.1Rating: 7.1 / 10 from 98 users
Neglected 13 year old Aloysha is cast in a cheesecake commercial and becomes obsessed with the idea of having a "perfect family" of his own, at any cost.
Director: Evgeniy Zvezdakov
Creator: Elena Dolgopyat
Actors: Pavel Melenchuk, Sergey Chonishvili, Olga Lomonosova, Evgeniya Zvezdakova

2 reviews for Chizkeik 2008 with English Subtitles