This movie portrays the drug scene in Berlin in the 1970s, following tape recordings of Christiane F. 14-year-old Christiane lives with her mother and little sister in a typical multi-story apartment building in Berlin. She’s fascinated by ‘The Sound’, a new disco with the most modern equipment. Although legally she’s too young, she asks a friend to take her. There, she meets Detlef, who’s in a clique where everybody’s on drugs. Step by step she gets drawn deeper into the scene.

If you search for a document telling you the truth about falling into drug addiction in the 70s, this is the right film for you. But this is not a mere documentary; it’s got artistic value, as well as great acting by the young and cute Nadja Brunckhorst and Thomas Haupstein. The scene where Christiane, after her first heroin sniffing, gets through a long gallery in a car with her friends is a wonderful metaphore of her first step into addiction. Great locations and a beautiful, functional photography complete this very good film, which represents an isolated case in director Ulrich Edels’s career. 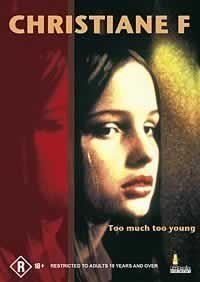