A famous film director remembers his childhood at the Cinema Paradiso where Alfredo, the projectionist, first brought about his love of films. He returns home to his Sicilian village for the first time after almost 30 years and is reminded of his first love, Elena, who disappeared from his life before he left for Rome.

Movies can wield a strange power over those who sit in the darkened seats of a theatre. The truly great ones manipulate your perception of reality, suspend your disbelief, and ultimately either alter or affirm your view on life. NUOVO CINEMA PARADISO is just such a movie. It is the near-perfect melding of direction, acting, script, sound track, and cinematography. Phillipe Noiret and Salvatore Cascio give the kind of performances usually associated with much more recognizable actors. The supporting cast looks like they could all be full-blooded Sicilians. The location shots add depth and realism to the entire production. Ennio Morricone’s music is simply the most appropriate and emotive I have ever had the pleasure to hear in a theatre. Tornatore’s script and direction are a joy, a breath of fresh air.

I will not spoil this story by repeating it, nor will I give away the ending, although it matters not a whit. I could disclose fully everything in this movie, and in seeing it, all my words would evaporate. There is nothing like the experience of sitting through it, becoming engulfed by it, and in the end, being changed. 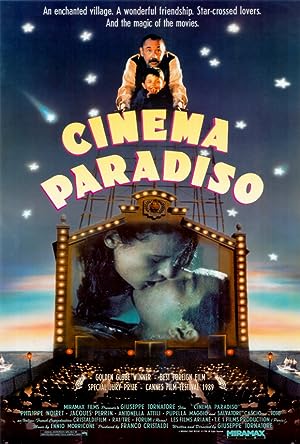