Come and See 1985 with English Subtitles

The feature film directed by Elem Klimov, shot in the genre of military drama. The action takes place on the territory of Belarus in 1943. In the center of the story is a Belarusian boy, who witnesses the horrors of the Nazi punitive action, turning from a cheerful teenager into a gray-haired old man for two days.

Come and See , well if you hate violence and brutality then you certainly wont want to see this. This Picture set in 1943 occupied Byelorussia is most probably the most true to life war movie ever, only Saving Private Ryan and Schindlers List can come close. What is amazing in this picture , is how the director uses a child’s perspective and view in circumstances that you can only describe as evil. The director pulls no punches in how bad times actually were for peasents and partisans alike as German and collaborators show the viewer how low and depraved a fascist military machine actually is.

I dont want to go into the plot , as this film is a MUST for anyone who considers themselves a film buff. Disturbing and terrifying scenes do not in anyway spoil the flow of the film , but when viewing this film , please desist from seeing this movie in the early evening , as you wont sleep.

The acting accolades of course goes to the main characters , but I wish to give a special mention for the Russian Partisan Commander , who was just simply , superb. Everything about him was what you’d expect a Red Army Officer to be. The looks , the attitude and the steely determination is simply a credit to the actor. The best scene involving the Red Army Commander was when they had captured an Einsatgruppen Unit , and the SS soldier , who knew they were facing death was allowed to speak , after there own Commanding Officer was pleading pitifully for his own life. The SS soldier tells his captors that they are sub-human and that there peasent belief in Marxism was grounds enough that they should be eradicated. The Red Army Commander then in just a few words tells his men , that they are not just fighting for Socialism , but also the right to exist.What happens after…well you’ll have to see.

Come and See is nothing short of disturbing, awesome, powerful and brutal. This is the best film I have ever seen regarding films portraying the Eastern Front 1941-1945 war. This film should be engraved in gold as the standard for any budding war film director. Only Saving Private Ryan and Schindlers List can be put in the same League table. 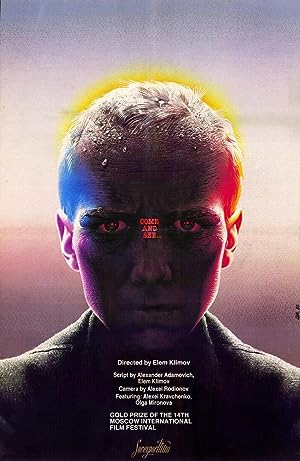