Aging teacher Carmela has a special heart for pupils from broken families, is challenged by the headmaster for this. The poor 12 year old Chala and Yeni, in which he is infatuated has both severe troubles on home ground.

It’s surprising the Cuban government let this film pass-it doesn’t show a flattering picture of Cuba, as it doesn’t disguise the poverty, rigid politics and injustice.

But the film is good not because it deals with the situation as a whole, or the education system, but because it focuses on a small group of people. It shows a teacher, an aged woman, responsible for helping her pupils cross the hell of their childhood.

The most troublesome boy in her current class in Chalah, whose mother is an addict and his father may or may not be a fight dog trainer for whom he works.

The most important thing-the story never becomes the old unbearable shtick about a teacher taming and saving students.

The child actor Armando Valdes Freire is simply amazing. He portrays a boy who is tough, street-smart, and reckless, and who deeply cares about his negligent mother. He feels that the teacher, Carmela, is the one person on whom he can count, and he’s devoted to her. He also likes an immigrant girl who’s in danger of being exiled with her father any minute.

Alina Rodríguez, who does Carmela, never misses. Her acting is so precise, she seems to be the teacher herself. She goes through her own hardship so she’s aware life is rough, but she is willing to be that little Dutch boy who puts his finger in the hole in the wall to prevent the ocean from washing over the city.

Clearly, as it is not a soap opera, some things remain open, and nothing reaches an ideal solution. However, the film convinces that there is hope where one special person can open the way for others. 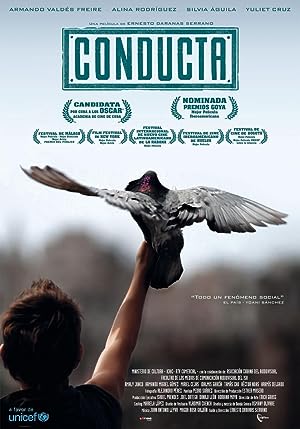 Conducta (2014)
108 min|Drama|01 Jan 2014
7.6Rating: 7.6 / 10 from 1,089 users
Aging teacher Carmela has a special heart for pupils from broken homes and is challenged by the headmaster to follow up 12 year old Chala which is infatuated in Yeni. They are both poor, and has severe home troubles.
Director: Ernesto Daranas
Creator: Ernesto Daranas, Ania Molina (collaboration)
Actors: Alina Rodríguez, Yuliet Cruz, Armando Miguel Gómez, Miriel Cejas

1 review for Conducta 2014 with English Subtitles