It’s counselor week at Camp Liberty, and these boys take camp to a whole new level. When new counselor Andrew (Brandon Rife) meets leader Jack (Gregory Michaels) during orientation, Andrew finds he has more than campfires and weenie roasts on his mind. His attempt to gain Jack’s affection fails, so he devises a plan that threatens not only a would-be summer fling, but Jack himself! This over-the-top 38-minute sex comedy – that’s full of tempting twinks – also features Addison Graham as Camp Liberty’s owner.

I had the distinct honor of having a look at “Counselor Week at Camp Liberty” before it was made available to the public. While it is not the kind of film I would choose for myself to watch, U definitely can see how younger gay men will be drawn to it. The idea for the plot is clever—an camp for gays—a place where they fish, play, cruse sex away from the rigors and rules of city life. With that said, you can imagine what gay summer life is like for young twinks with raging hormones. The guys that come to this camp are not what you expect for summer campers. From almost the moment they arrive, they feel sex in the air and act on it. That alone gives us a fun movie but director Stephen Vasquez went a bit further and brought in a plot that involves infidelity and cheating on brothers. Here in 38 short minutes you get more sex and more intrigue than you can deal with.

There is nothing serious here so if you are looking for mental and intellectual stimulation, you have chosen the wrong film. This is one of those films that you will probably forget after seeing but you enjoy at you watch.

Andrew (Brandon Rife) is a new camp counselor who meets camp leader Jack (Gregory Michaels) at orientation at Camp Liberty, one of the few camps designed for gay campers only. He soon discovers that there is more than fishing, sports and campfires. He tries to win Jack over but has no luck and develops a plan. Clothes come up, sex ensues and everyone is happy until the whole blows up. This is little more than uncensored fun so remember that as you watch it. The film is totally uncensored and there is frontal male nudity and sex—for your pleasure. 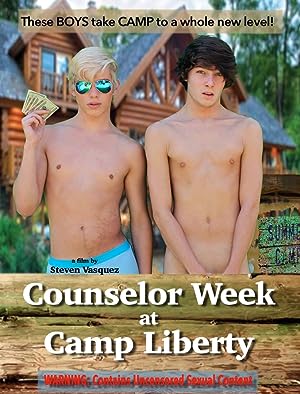