Set in 1969, a twelve-year-old grows up in Key West with his mother, who is paying the bills by stripping at the local topless bar. The boy finds out about her activities and tries to convince her to stop, to no avail. A local restaurant owner hires him to collect fish from a boat out in the bay, and the boy discovers that the restaurant owner is using the fish to bring drugs in to shore. He steals one load and goes about selling it so his mother can afford to quit her job.

This is one of those movies where the user rating seems strangely out of step with the comments on it. With one, barely worth the mention, exception, all those who have commented liked the film. I too found it a very pleasant diversion and a film that I have happily watched several times.

To my way of thinking young David Arnott does a terrific job and is absolutely charming. He plays Chris, a completely innocent kid who gets on the wrong side of the law, when he sees an opportunity to get enough cash to rescue his mother, Goldie Horn, from her new job as a stripper. It is a big ask to take a 12-year old lad with no acting experience to play what amounts to the lead in a movie and to narrate it too. It is also asking a lot for him to have to be filmed briefly in the buff in one scene. If he had a problem or two, it is hardly surprising. Nevertheless, it is his innocent charm which carries the film. There is also a nice chemistry between David Arnott and Goldie Horn.

I sincerely hope that this was not another case of the critics massacring a movie and with it a promising kid’s career. 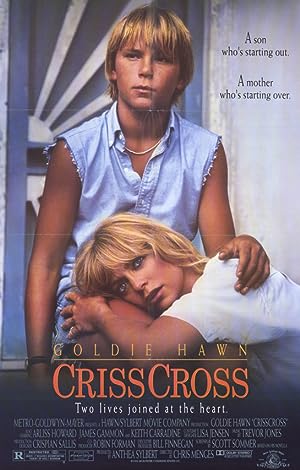 CrissCross (1992)
100 min|Crime, Drama|08 May 1992
5.8Rating: 5.8 / 10 from 1,508 users
Set in 1969, a twelve-year-old grows up in Key West with his mother, who is paying the bills by stripping at the local topless bar. The boy finds out about her activities and tries to …
Director: Chris Menges
Creator: Scott Sommer (novel), Scott Sommer (screenplay)
Actors: Goldie Hawn, Arliss Howard, James Gammon, David Arnott

Be the first to review “CrissCross 1992” Cancel reply