A family comprising of a father, mother, daughter and son head to the south of France for summer vacation. Charly’s friend, Martin joins them. He is gay and has a crush on Charly. Charly’s mother, Beatrix, thinks Charly is gay and having an affair with Martin. Charly’s father is somewhat bothered by this and by the open sexuality in the family.

Some sauce is going on, and gay going on. Is girly haired son Charly a? No, turns out his dad is.

“Its nice being bored on holiday” says Mother to Charly. No it isn’t. You’ve got to be up to something. Have your skinny balding lover arriving for some shagging on the rocks; he keeps his flat cap on.

More jerking off in the shower (friend Martin) Dad is getting stiffies watching and imagining.

More jerking off in the shower (Dad now) It’s a beautiful world this Cote D’ Azur if you lay back, and do who or whatever you want.

Occasional “step outside the frame” song and dance routines occur to inflate light-hearted larkiness but come across as looking ludicrous.

“Silly soufflé of seaside shenanigans, sexy secrets, and jerking off in the shower” would be my strap line.

I learnt that sea violets are a soft shellfish.

I’m scratching my head why BBC4 showed this. 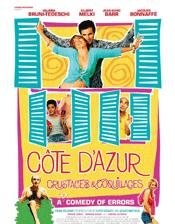 Côte d'Azur (2005)
96 min|Comedy, Musical, Romance|30 Mar 2005
6.6Rating: 6.6 / 10 from 1,943 users
For summer vacation, Marc (Melki) and Béatrix (Tedeschi) take their two kids to the seaside house of Marc's youth, where their daughter takes up with a biker and their sons roams the beach with his best friend, who is in love with him. Things get steamier when Béatrix's lover Mathieu shows up, and Marc's old flame appears.
Director: Olivier Ducastel(co-director), Jacques Martineau(co-director)
Creator: Olivier Ducastel, Jacques Martineau
Actors: Valeria Bruni Tedeschi, Gilbert Melki, Jean-Marc Barr, Jacques Bonnaffé