In the early 1950s, a 10-year-old boy moves to Warsaw to stay with his bourgeois aunt. In spite of harsh Stalinist times, they are both fascinated by horses.

“Cwal” (“At Full Gallop” or “In Full Gallop”), is the story of a collection of good people living under the USSR-supported Stalinist-Communist single-party government of the Polish United Worker’s Party (the ‘Polska Zjednoczona Partia Robotnicza’, or the ‘PZPR’) in the former ‘People’s Republic of Poland’ (the ‘Polska Rzeczpospolita Ludowa’, or the ‘PRL’), a satellite state of the Soviet Union.

This film, apparently largely based on the real childhood experiences of the director, Krzysztof Zanussi Zanussi (1939-, “Persona non grata” (2005), “Life as a Fatal Sexually Transmitted Disease” (2000)), shows just some of the suffering caused by the misguided Communist politics of ‘class’ envy and the resentment of ‘bourgeois’ hobbies in the former Eastern bloc (see Ksawery).

The good people of Poland are repeatedly denied and repressed as when Hubert is not permitted by the state to accept harmless packages from his father in England and when his eccentric Aunt Idalia (the beautiful and talented Maja Komorowska of Krzysztof Kieslowski’s “Dekalog, jeden” and “Dekalog, dwa” (1989), Zanussi’s “Kontrakt” (1980) and Andrzej Wajda’s “Wesele” (1973) fame…) cannot easily (or legally) indulge in her ‘bourgeois’ passion of horse riding without winning the assistance of an ironically overfed government Minister or a pompous ‘Socialist hero’ the type of General Rossokovsky.

I would highly recommend this very entertaining and emotive film to anyone, including – no, especially – the Socialists of all parties. 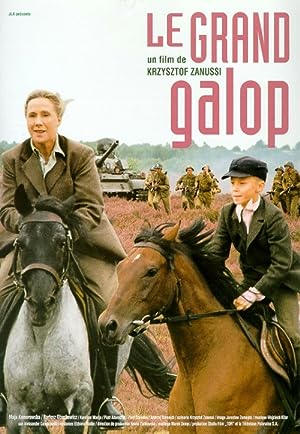