A sixteen-year-old boy insinuates himself into the house of a fellow student from his literature class and writes about it in essays for his French teacher. Faced with this gifted and unusual pupil, the teacher rediscovers his enthusiasm for his work, but the boy’s intrusion will unleash a series of uncontrollable events.

Francois Ozon’s latest film is almost like an irresistible novel which you never wanna put down. The different ways in which he develops the characters is quite fascinating to watch.

Germain is a bored French professor who finds most of his students uninteresting or untalented. Then he becomes infatuated with a student’s (Claude) essays, which are about a friend’s family’s life to which Claude has got a way into. Both their infatuations and fascinations make them take interesting actions which lead to almost disastrous consequences.

The final scene makes you wonder whether you too, like Germain, get the same voyeuristic pleasure watching others’ intimate lives unfold in front you.

Ozon’s movies have some some sort of charm which always keep you hooked till the end. I remember enjoying his last movie, Potiche; but unlike his last movie, this one is quite thought-provoking and gives various dimensions to character-development. 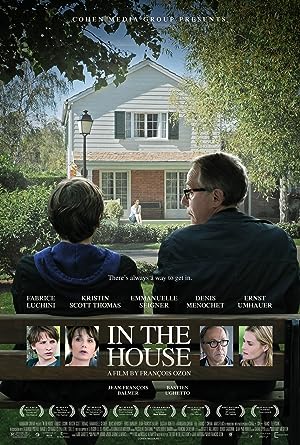