31 year-old Tristan remembers the time when he was 15 and had just hit puberty. But he is not alone in this, he is with a large group of friends: Specki, a fat kid who is always stuffing himself, Streusel, a cheeky boy covered with spots, Tümai, a pretty Turkish girl, Kerstin, best friend of Tümai and very sporty, Elrond, with a heavy stutter, but regardless extremely popular and good looking, Lars and Simone, so far the only couple in the class who spend most of their time smooching and Long Jana, a girl who is at least 6 foot tall and extremely skinny. Tristan has just developed a huge crush on Kerstin, but is too shy to do anything about it. As if that weren’t enough, his parents, both psychoanalysts, separate – which puts an abrupt end to childhood naivety. Tristan is supposed to move town at the end of the school year. But time is too short to grow grey hair. The friends experience awkwardness at dance school, masturbation and first fantasies of the opposite sex, amateur school theatre, the first ?real? party with lots of alcohol, strip poker etc. The biggest interest is of course to get ahead with the girls which often ends up in very funny situations. Their mutual enemy is Simone’s father who beats her until Tristan finally takes up the courage to stop him. On Tristan’s last day, when all his friends come to say goodbye, Kerstin is missing. To his surprise she waits on the swing in front of Tristan’s new home. This is the beginning of a long, deep love, which leaves Tristan with the knowledge that he experienced something extraordinary, which most people never will.

What do you get when you mix a coming of age drama, a teen comedy and a nostalgic flashback to 1985 ? Well, in this case you get a wonderful movie (especially appealing to those people who were teenagers in the 80ies), which is neither too broad/gross nor overly sentimental (except for the present-day frame story). Apparently you also have a marketing problem: sadly this seems to become another undeserved flop at the German box office.

The main forte of “Das Jahr der ersten Küsse” are the actors: I’ve rarely seen such a good ensemble of young actors (most of them giving their debut), who really are the age of the characters they’re playing for a change instead of 22 year-olds playing 15 year-olds as in most Hollywood movies. Every one of them (especially Rebecca Hessing, but also Max Mauff, Nina Asseng and Luana Bellinghausen) is perfectly cast and acts very natural.

The main weakness of the film is the tempo: the unnecessary frame story and voice-over narration (first person to boot, which is usually a bad idea), the frequent “fade-to-blacks” (a stylistic device which was also overused in another recent German film, “Wie Feuer und Flamme”) and the relatively long takes, all make this movie slower than it needs to be. If a bit more were happening plot-wise (like a disco visit of the clique, for example) this could have been balanced, but unfortunately the actual story is a little thin. Two minor quibbles that I have with the film are the freedom which the turkish girl Tümai enjoys (in 1985 she probably would’ve had a father like Simone’s, who wouldn’t allow her anything) and the fact that 15 year-olds still play bottle tricks. Today’s teenagers may indeed have their first sex earlier, but 17 years ago teenagers were not *that* naive either.

As an overall rating I’d still give this movie 8/10 (despite the mentioned flaws), because it gives such a likeable and realistic portrait of German teens in the 80ies. 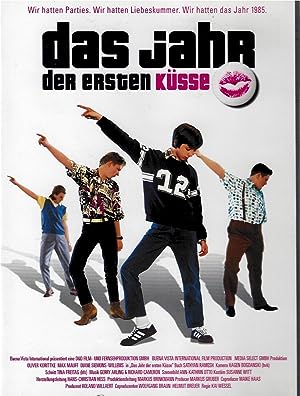 The Year of the First Kiss (2002)
94 min|Comedy, Drama|03 Oct 2002
7.2Rating: 7.2 / 10 from 294 users
31 year-old Tristan remembers the time when he was 15 and had just hit puberty. But he is not alone in this, he is with a large group of friends: Specki, a fat kid who is always stuffing …
Director: Kai Wessel
Creator: Sathyan Ramesh
Actors: Oliver Korittke, Max Mauff, Diane Willems, Thomas Drechsel