Two school friends decide to start a pretend straight relationship in an effort to fit in.

I did enjoy this movie for the most part but some things in it just didn’t sit with me for some reason.

The script was a bit here there and everywhere. Some characters were just caricature mainly the students in the school but I’m not entirely sure if that was the fault of the acting or the script or both.

Before I talk about the male lead I do want to say he really impressed me because I thought he was really lifeless at time but then I realised it was a choice because in one scene where the characters relaxes and feels safe he really comes alive and it’s a really nuanced choice and found it great.

The life of the male lead is very very unclear, I found the dynamics of the people he interacts with very peculiar. He has conversations with people like he is their friend but then they relentlessly bully him and I don’t even think it’s like “haha lads being lads joking” straight macho banter, it is bullying. Then he will once again be talking to them like they are best friend. I think this is really strange and bugged me throughout the whole film.

The female lead is wrote so much better and her wants and traits are much clearer. I think this hinders the male lead once again because it makes him tiresome compared to the female lead.

Some scenes are really impactful and done really great. You can almost feel what the characters are feeling and I think that is so good, however some of theses sense get muddy with strange choice and behaviour from characters. It takes you back a bit. I think this issue is this movie likes to make sure you understand everything.

So the lead males room is decorated with overtly masculine men in army uniforms because he wants to join the army. I thought that was great set dressing and kinda funny like yeah he might like to have things like that on his wall. But then the movie has to point it out like “HAHA isn’t that funny that he is gay and has these posters on his wall audience”. I wish it would let people come to it on their own. This isn’t the only instance it happens in different scene too in different ways.

The characters are also kinda selfish too which makes it hard to connect with them and I totally get it, with some things in their situation they need to be selfish to protect them selfs but then some actions I am left wondering why they would do that.

The ending was nice and kinda sweet and I want to really like this movie. It seemed really cute and I guess I did like it I just had some issue. It is totally watchable so give it a watch. 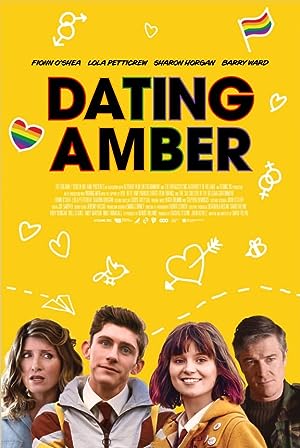 Be the first to review “Dating Amber 2020” Cancel reply