In Reetveerdegem (English would be Arsefeatherham), a fictitious derelict hamlet near run-down industrial city Aalst (Alost), five debt-burdened drop-out Strobbe brothers move back in with their pensioned mother ‘Meetje’, still wasting their lives in dead-end jobs, alcohol, gambling and meaningless sex. Celle also took in, as if their baby brother, his son Gunther. Nobody expects the knave (13) to grow up and become a respectable citizen either, despite his better IQ and attitude, as his uncles’ and father’s mischief and reputation seem to sabotage every single opportunity. Discovering love may motivate him after all, or accidental paternity could drag him down to father’s level.

I know one shouldn’t mix reviews with personal experiences, but when watching this film I couldn’t help but constantly remember an anecdote that happened to me one New Year’s morning in Brussels: trying to cure my party hangover with some friends in a bar, we observed a guy trying to cross the street with a crate of beer. Now the streets were all frozen over and the king had advised in his New Year’s address to stay at home. Plus the roads in Brussels are caved in by traffic. So the weight of the crate kept the guy sliding towards the middle of the street. He could make it to either side without, but not with the crate. Nevertheless, he kept trying for over an hour to pull, shove or otherwise move the crate from where it was stuck – until he found the ingenious solution: He drank six bottles of beer on the spot, thereby sufficiently reducing the weight to pull the crate over – only that he got so drunk and spaced out in the process that he slipped and broke all of the bottles, so his whole effort came to naught.

This little story has nothing and everything to do with ‘Misfortunates’ which is chock full of incidents like this one. And as abundant films about losers and social misfits may be in Belgian/ Dutch cinema (like Aaltra, The Sexual Life of Belgians, Flodders, Spetters), this one takes the cake in every respect: the autobiographical story is perfectly adapted and wonderfully played. Its provides tons of utterly irrelevant, but amusing add-ons like when the Strubbes invite themselves over to an exiled Iranian couple to force them into watching a Roy Orbison concert because their TV’s been repossessed. Like in my little story, one cannot help but somewhat admire the persistence of the Strubbe family to make their lives as dysfunctional as humanly possible, while one cannot ignore the destructiveness of it all.

If you like painfully real social dramedy, this one is for you; if your threshold for witnessing the lower recesses of human behavior isn’t very high, you’re likely to find ‘Misfortunates’ an extremely tasteless affair. 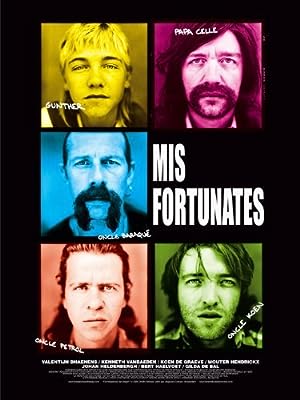