To Greg Heffley, middle school is the dumbest idea ever invented. It’s a place rigged with hundreds of social landmines, not the least of which are morons, wedgies, swirlies, bullies, lunchtime banishment to the cafeteria floor – and a festering piece of cheese with nuclear cooties. To survive the never-ending ordeal and attain the recognition and status he feels he so richly deserves, Greg devises an endless series of can’t-miss schemes, all of which, of course, go awry. And he’s getting it all down on paper, via a diary – “it’s NOT a diary, it’s a journal!” Greg insists, preferring the less-sissyfied designation – filled with his opinions, thoughts, tales of family trials and tribulations, and (would-be) schoolyard triumphs. “One day when I’m famous,” writes Greg, “I’ll have better things to do than answer people’s stupid questions all day.” So was born the Wimpy Kid’s diary.

I haven’t seen a film like this in ages, I can’t even compare it to another. Fun for the kids and adults too. A kid starts middle school, making the transition from grade school and this film nicely deals with that chapter in a kid’s life. The “cool” older brother who lives to antagonize you, the “yukky” baby brother who embarrasses you, the nerdy friend who makes you look bad, they’re all there. Who can NOT relate? The direction is perfect, the film is paced properly and exactly.

Some really fantastic performances from these child actors and a storyline everyone can relate to. No foul language or sexual situations… wow! We went with two 8 year olds and a ten year old and they all loved it. For once, a film for everyone! 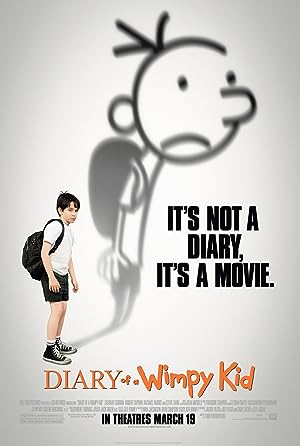