Thomas is the son of a prison warden. He falls for and seduces Martin, who is older and one of the prison inmates. After Martin is released, They try to build a relationship and a life together but, no one will let them alone.

An unusual work in Wolfgang Petersen’s filmography, “Die Konsequenz” (“The Consequence”) is a heartbreaking and unconventional love story, a movie that makes us look at Petersen in a different way, far from the optic we used to know from the director of blockbusters such as “Air Force One” and “In the Line of Fire”. Without the speed and the colors of his notorious films, he has plenty of time to develop his story and create a brilliant piece that echoes life, giving his most natural and realistic work along with “Das Boot”. His posterior enterprises might have stronger energies, action and bigger castings but doesn’t have the patience and beautiful elements this has.

A saddening tale on the recklessness of youth in its pursuit for love, “The Consequence” deals on the obstacles two lovers have to face while trying to be together. Not the ordinary love story, quite the opposite. This one involves Martin (Jürgen Prochnow, in his best performance) an actor imprisoned for seducing a minor, and the young Thomas Manzoni (Ernst Hannawald), son of the prison’s warden. Both were approached due to a play performed in the jail – unimaginable setting for such encounter to happen but believable in certain contexts. They share some good moments, always in secrecy, but the challenge comes after Martin’s release. They meet again, already sure that what they shared was love and they’re ready to live with each other, but Thomas parents are against their relation and even more opponent to their son’s homosexuality, and these new facts causes the role changes in the story: this time the younger one will be arrested – in a juvenile facility though, after some arrangements made by his father – while the other will try anything to be near his lover or to release him if possible.

Not the cup of tea of many viewers out there who can’t handle sad stories but the moral and warnings we get from this tale are truly valuable, very honest to us. It’s cruel but it has a point. More than just a love story, it’s a painful piece on the consequences of immaturity, right in that drastic point between youth and adulthood, already showing that choices have ultimate and heavy consequences that’ll affect everyone’s lives in one way or another. Thomas apparent brave act of showing to his family that he loves Martin and he wants to live with him only proves to be disastrous to himself. Their union faces bumps after bumps, and a great part of those happen because of the younger guy, not smart or not experienced to know the ways of life. If only he kept this a secret, just run away with his partner, things would might turn out to be OK for him and Martin.

Enthusiastic admirers of great acting will be delighted with the magnificent performances of the main stars. Prochnow, usually best suited in villain roles, is amazing in this sort of heroic role, not a perfect guy but a committed, passionate and kind, completely caught off guard and head over heels for this boy and always making his best to help him, even when he realizes that it’s no longer possible. He express plenty with just few words. Hannawald’s angelical face little by little becoming the face of sadness and misery is certainly the most unforgettable in the movie along with some of his lines (“I think it’s really rotten of them to lock you up like this for making love to a boy” innocently referring on Martin’s condemnation. He gives the performance of a lifetime in here.

Times are different, there’s more openness and acceptance when it comes to sexuality issues but things aren’t so bright and positive, which makes this film even more relevant today than like it was in the 1970’s. Desperately needs more audience. 10/10 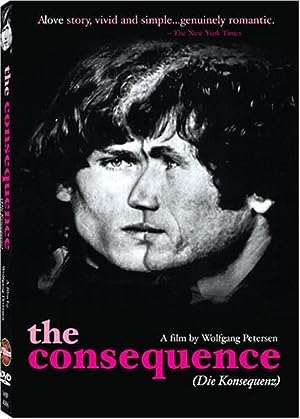 Die Konsequenz (1977)
100 min|Drama|02 Dec 1977
7.2Rating: 7.2 / 10 from 560 users
Thomas is the son of a prison warden. He falls for and seduces Martin, who is older and one of the prison inmates. After Martin is released, They try to build a relationship and a life …
Director: Wolfgang Petersen
Creator: Alexander Ziegler (novel), Alexander Ziegler (screenplay), Wolfgang Petersen (screenplay)
Actors: Jürgen Prochnow, Ernst Hannawald, Werner Schwuchow, Hans-Michael Rehberg