A concerned father of a six year old takes it the wrong way.

This short film is about a father discovering his six year old son who writes about ‘dik’.

In just the space of ten minutes (and that includes the credits), “dik” manages to take the viewers through a plethora of intense dramas. From a boy proclaiming to like ‘dik’, to the parents’ revelation of experimentation, then more hell breaks loose and the situation becomes irretrievably damaged. “dik” is fast paced, quick witted, and very entertaining. I just could not stop laughing as one can of worms is opened after another. There are so many surprises and jokes, that every second of it is entertaining. And the ending is so good, but I will not spoil it here. It really amazes me to see that so much drama can be packed into ten minutes. Watch it if you have the chance. 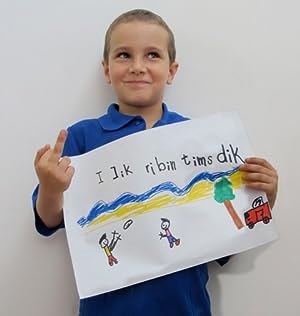