When a young brother and sister spend a pivotal summer away from home, they are changed. Ting-Ting and Tung-Tung (Wang Qiguang) are children of the city, but when their mother is struck ill, they must leave Taipei, Taiwan, behind and spend the summer with their grandfather and grandmother (Mei Fang) in the country. As they wile away the days at play, the elder Tung-Tung is garnering glimpses of adult responsibility and is slowly growing to realize what it means to be a grownup.

I’m not a fan of Hou’s later work, which can be obscure, pretentious and painfully slow, but this early movie of him from 1984 is gripping in its simplicity. One summer in Taiwan, a young boy and his sister are sent to the country home of their grandparents, as their mother has been hospitalized. The movie is told from the children’s point of view, and nothing terribly important happens in much of it, just life passing by during one summer in a rural village in Taiwan. The boy interact with the other children in the picturesque mountain village, while her younger sister, who is unable to understand what has happened to her mother, mostly stays at home of their grandparents. What is best about the movie is the warm portrayal of the characters, especially the grandfather, a stern doctor. 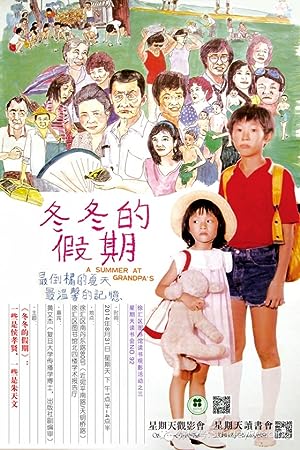