Don’t Look Down 2008 with English Subtitles

Coming of age. In Buenos Aires, Eloy is on the verge of manhood. He studies physics, helps with the family headstone business, and does advertising – handing out flyers while walking on stilts or wearing an empanada costume. When his melancholy father dies, Eloy imagines that his father visits him at night; the explanation is more pedestrian – Eloy has started sleepwalking. Things change abruptly: while sleepwalking, he falls through an open skylight into the bed of Elvira, a young woman from Barcelona visiting her grandmother. Elvira invites Eloy to become her lover and teaches him Tantric sex. Eloy discovers bliss. And his father?

It comes as a surprise to find that Subiela, leading exponent of Magic Realism in the movies, is still at it after decades and the exposition, with the cemetery’s dead taking afternoon sun and his dad showing up with nuts and bolts, looks like it’s going to be vintage.

However the piece settles down into lengthy make-out sessions between the two good looking leads – which is OK for five minutes but tedious thereafter.

Good film craft but no substance.

There’s nothing much else to say about this one to bring a coverage up to the minimum requirement. 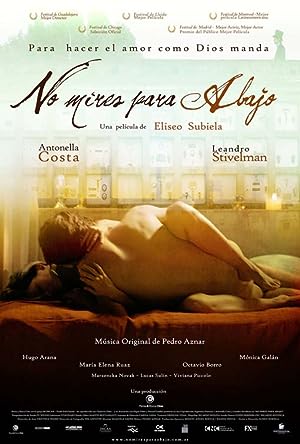 2 reviews for Don’t Look Down 2008 with English Subtitles