When Caleb’s gay roommate Kyle reveals that quite a lot of straight woman bed with gay men (ostensibly to convert them), nice guy Caleb considers going gay to improve his unsatisfactory heterosexual sex life. He shortly thereafter falls for Gwen, whom he meets at a party, but she’s got her own sexual frustrations going. She’s only attracted to gay men while instantly dismissive of any straight guy approaching her, such as Caleb. Kyle quickly moves on the Caleb-is-gay campaign to benefit them, but his motives aren’t entirely altruistic. He longs for Marc, a desirable hottie who’s Gwen’s gay roommate. Unfortunately for Kyle, Marc only has eyes for Caleb. Kyle’s plan: Get Caleb to date Marc so it’ll bring Caleb closer to Gwen while putting himself (Kyle) in proximity with Marc (their true targets). But as Gwen starts putting the moves on her roommate’s new boyfriend, and as Kyle becomes increasingly jealous of Caleb’s time spent with Marc, and as Marc persists in laying the foundations for a long-term relationship with Caleb, it becomes a question of how long the deception can continue before something gives?

Having seen numerous ‘funny’ or supposedly funny queer films over the years, I have begun to believe that the gay romantic comedy was doomed.

While films like TRICK and others of its nature are pretty, much like cotton candy at the state fair, it’s pretty but eventually it makes you kind of sick.

Imagine my joy and complete surprise when I saw EATING OUT. Warned in advance that it was a queer take on the college sex comedy ala PORKY’S and ANIMAL HOUSE, I was concerned that it was going to be another one of those good faith efforts that falls far too flat, BUT NO!

The cast was brilliant, carrying off incredibly witty and sharp dialog that snapped harder than Rupaul. With characters that had big personalities to carry, it is impressive that no one delved into cartoonish behavior or stereotypes. And as for any haters that have trouble with some of the non-pc language, let me remind you that the bland and non-offensive is rarely funny (see Chris Rock, Richard Pryor, Bernie Mac, etc for examples)

I have not laughed harder or enjoyed a film more since the first PULP FICTION (in a completely different way) and I cannot wait to see what Q.Allan Brocka brings to the big screen next.

This is the perfect date movie, friend movie, or rent it at home and eat popcorn kind of movie. Completely entertaining and worth far more than the usual admission. Anecdote – at the screening I attended that sold out show received a standing ovation, 1400 fans can’t be wrong! 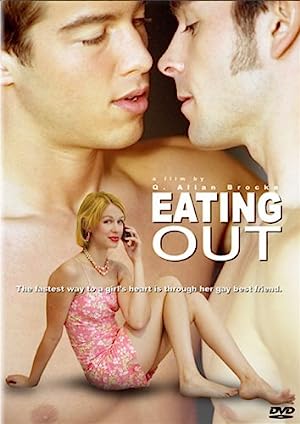 Be the first to review “Eating Out 2004” Cancel reply